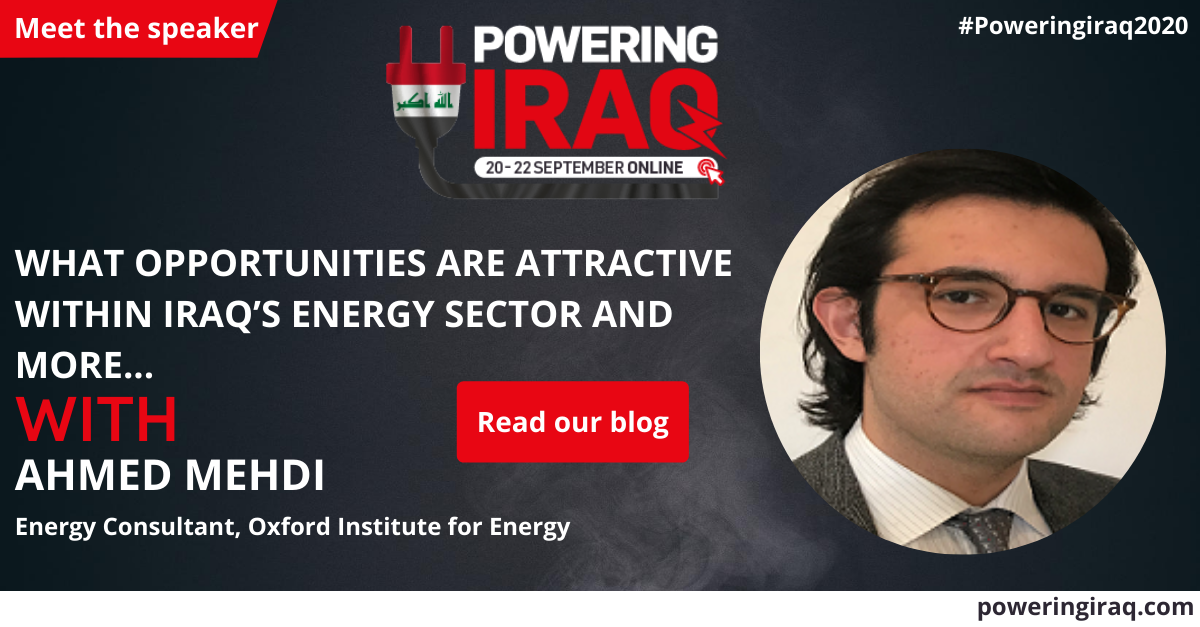 Welcome to Powering Iraq virtual event. Can you tell us a little bit about your experience working in Iraq?

Alongside my work for the Oxford Institute for Energy Studies conducting primary research on Iraq’s oil and energy sector, I also advise a number of energy companies in the MENA region (including Iraq) on project economics, commodity pricing, and country strategy.

In the past few years, Iraq has shifted from being forecasted as the fasted growing economy in the region to the largest contraction, due to plummeting oil prices, protests and now Covid-19. How will the current economic and political climate help support the much-needed energy reform process?

It is no secret that Iraq’s energy sector has been the engine of economic growth in recent years: the oil sector accounts for almost 65% of GDP, 90% of government revenue and 98% of exports. So, clearly, the fall in benchmark crude prices has hit the economy hard. Most credible estimates see the economy contracting by 9-10% this year; the IMF expects Iraq to register one of the world’s largest deficits in the world. Covid-19 has also shifted the equilibrium oil price to a $40-50/b range over the medium-term – a challenging dilemma for Iraq’s budget. The ballooning of government expenditure over the past decade has focused attention on topics that were previously a luxury: building up the non-oil economy, addressing Iraq’s major energy infrastructure needs (gas, power, electricity) and addressing Iraq’s growing unemployment (and poverty) rate. The crisis has also drawn attention to the need to create new commercial frameworks to encourage private sector capital (as government finances come under growing pressure): in the power sector, improving the bankability of Power Purchase Agreements (PPAs) by improving fuel supply optionality and addressing payment issues and tariff collection; in the oil sector, encouraging IOCs to invest on their own account (outside the cost recovery mechanism) in major infrastructure projects (pipelines, storage and water injection); and elsewhere by using Iraq’s rich natural resource base to underpin sustainable cash flow models (as well as improving debt-to-equity ratios).

One example of where this has been a win-win situation is the Basra Gas Company (BGC) model (where LPG exports have been used as a financing mechanism).

What opportunities are attractive within Iraq’s energy sector?

Given the oil and gas industry’s focus on cost and margin, new and emerging technologies have a major role to play in Iraq’s oil and gas sector. For example, BP and its partners significantly reduced costs at Rumaila following a major digitalisation of upstream operations. The integration of renewables in upstream operations is also a growing trend in the Middle East, given the huge drop in the levelized cost of energy (LCOE) associated with solar projects. Reducing gas flaring has been talked about for years. But now, it is a must. The opportunity costs are just too high for a country like Iraq to justify. A lot of capital has moved into PE-backed funds with an Energy Transition (ET) focus and Iraq is always discussed, given where the country sits on the flaring chart. In the downstream, beyond the need to address Iraq’s growing gasoline and gasoil demand, the growing volume of refinery sulphur provides the country with export opportunities. Iraq’s energy potential is endless. The issue is addressing the regulatory framework and ensuring the terms for cost recovery work.

Can you share your thoughts on Iraq’s natural gas potential? What should be done to develop their natural gas resources and prevent continued flaring of gas?

Iraq’s gas balance presents a disturbing picture. Despite the role of Basra Gas Company (BGC) who collect, process and transport gas from Licensing Round 1 fields, Iraq flared around 17.9bcm in 2019 alone. While Iraq is not alone in flaring significant amounts of gas – US flaring has grown significantly since 2015 (abetted by weak US gas prices); Iraq is alone in being a major importer of gas. For example, Iraq imports gas from Iran for its power plants in Baghdad (Besmaya, Quds, Mansuriyah and Sadr) and Basra. While better than crude burning (given the value of Basra cargoes to Asia), imports both undermine energy security and highlight the opportunity costs of flaring (without forgetting the health and environmental risks). Beyond the expansion of gas processing plants in Basra and the build-out of new processing hubs, the development of non-associated gas fields remain key. Gas pricing reform also remains important: for example, reviewing South Gas Company’s pricing system to the industrial sector.

What measures do the government need to take to rehabilitate and transform the energy sector?

Electricity is the bellwether of success for any new government. Electricity impacts everyday life: productivity, jobs, political stability, security, and even gender relations and health outcomes. The measures needed are huge: in the power sector, addressing the operational efficiency and huge losses (both technical and theft-related) in transmission and distribution; electricity demand growth needs to be addressed, too. Iraq’s power demand is growing at around 10% per year (with population growth above 1mn/yr). Tariffs operate below to cost of recovery and private diesel generation businesses – profiting from subsidised fuel – have vested interests to keep the status quo. The unsustainable pace of demand growth and the financial challenges discussed earlier make this an imperative requirement. These challenges are not new: Iraq’s government has previously attempted to increase tariffs on a cost-recovery path in the past; but they faced major resistance from commercial groups. So, it is a politically sensitive issue as well – the trade-off is paying higher prices in return for improved delivery. For investors, calibrating a tariff formula which reflects the true cost of generating power is a key way to improve investor confidence.

Developed economies are relying less and less on fossil fuels and more on green energy. Where does Iraq fit within this paradigm shift?

Like other MENA peers, Iraq needs a credible long-term energy strategy, one which addresses energy efficiency; building a sustainable gas industry; using its oil-export revenues to diversify (positive cycle) and monitoring the potential impact of the global energy transition on oil prices. For IOCs, they have a cost-of-capital disadvantage due to investor concerns and this explains some portfolio rebalancing taking place. Certainly, we could have a situation where energy transition concerns drive big producers to apply a fast monetisation strategy, leading to a ‘lower-for-longer’ oil price curve – Iraq needs to pay attention to global energy market trends and integrate this into long-term planning. Iraq should by no means miss out on the renewable revolution, but its focus for now should be on extracting the most value possible from its oil and gas sector.